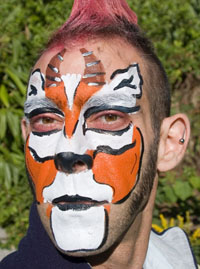 Two-Spirit People, or one called a ‘Berdache’,? are individuals sometimes categorized as either gay or lesbian, transvestite or bisexual. Those who, in many Native American Cultures, who are respected and looked upon as people who are both male and female in spirit, making them more complete, more balanced than simply a man or a woman. Before those from Europe came from across the waters, and took over their land, these people were part of the ‘norm’, connected with the very heartbeat of the life force we are all part of. Even today, Berdaches are accepted in many American Indian societies and in other settings.
Some native cultures described people who have some degree of homosexuality as “Two-Spirit People.” People who have both the spirit of a male and female combined in one body. In these cultures the two-spirited person was very important and very honored. They are looked at as a messenger from Spirit, the wise ones, the seers of things unseen. Their gift of having two spirits allowed them to see, feel and understand things that others could not. They were healers, the medicine men/women, the keepers of wisdom and of spiritual understandings.
Unlike European Americans, gender or sexual divergence did not threaten the Indians. Berdache males in particular often became healers, surgeons, counselors, therapists, high religious priests, shamans, witch doctors and medicine men. They were regarded as a kind of holy men.
In pre-contact times, native American people had a great reverence for these Two-Spirit people. Quite naturally they viewed Two-Spirits as extraordinary sources of information about human nature. Two-Spirits were healers, artists, prophets — whatever their personal vision impelled them to be. The native world had great respect for personal vision. If you were born a male, but came back from your first vision quest at 13 years and said your vision told you to live as a woman, your choice was honored. You even got a new name celebrating your choice! Likewise the woman who said she wanted to live as a man, love as a man, even fight as a man, was able to do that freely.

The preceeding are exerpts from various books on the subject of the Berdache Man.

This site uses Akismet to reduce spam. Learn how your comment data is processed.

Find Me on Social Media

Scroll back to top