Spit was okay but it was raining and the tarp did not cover much. Paul did the contest but just wasnt the same. I took down the photo of a girl who flashed her breast even though it was the funniest photo. 🙂 I am trying to figure out the weekend plans for the oscar mess. I think I am going to the Here Bar event to benefit Trevor. I spoke to Chris at APLA and he said no thanks for coming to Abbey as well. I think they are snobs at APLA. I left a long winded message for Jeremy (IN) and told him to call Chris and have me invited if he wants. Otherwise, I will just plan on going to Trevor one. For Friday he asked that I take pictures for the magazine anniversary party. Said he would pay me too. Tonight I work at Mickys. Should be okay crowd because its been raining for so long that people will come out regardless. As for sister biz, I might go satruday to ashram west leather dealio, but not really thrilled about that. I will see what else comes up. 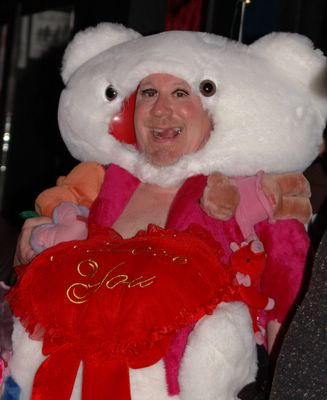 I decided to start a blog for my loving fans. Mostly I want to detail my photo work, my sister work, and any other general things about my life that arent too much of a personal nature for the public domain. So to go back about a week, I enjoyed dragstrip a lot. You will find those pics at www.dragstrip66.com in the galleries as usual. Monday I went to Valentines Alternative at Rage as Guard. I had a very nice time and saw many people I knew. Tuesday I did my usual at Mickys Play. I am very impressed with myself at how dedicated I have been over 2 years on a weekly basis. I still get good shots and I think the patrons really like me. Chilled on Wed. Went to wet shorts contest with Mike yesterday. Got a few photos which I will email to Charlie(bar mgr) and maybe to Ken(writer of silverlake column). Nothing exciting today. I am going to Spit tomorrow and then hopefully to a Fairie gathering on Sunday. Update to come next week. Thanks for listening.