White House: No decisions yet on auto bailout | Politics | Reuters.

Its not about religious rights, it is about civil rights for every american!

Gay Marriage and Equality for Everyone Without Hatred 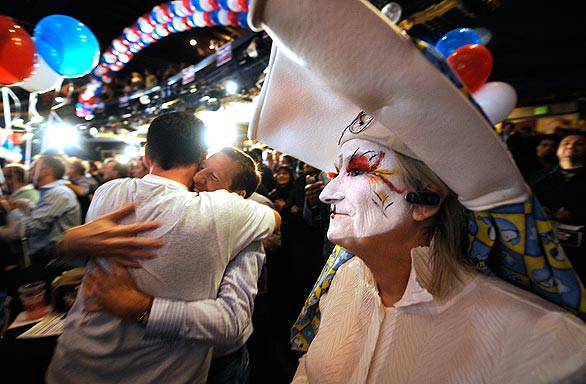 Sister Margaret Snatcher of the L.A. Sisters Of Perpetual Indulgence

Sister Margaret Snatcher of the L.A. Sisters of Perpetual Indulgence reacts along with the crowd to the election of Barack Obama at a “No on 8” party at the Music Box at Henry Fonda in Hollywood.
(Wally Skalij/LA Times)

We have come so far in tolerance, a black man is president, and chickens are not confined in cages so they cannot move their wings. Cannot a gay man have equal rights too? Is there really any harm in allowing two men or two women to marry each other out of love? Of course not! The only proponent here is hate by religious fanatics who need to go back to last century with their outdated bigotry. Nuf said.